skip to main | skip to sidebar

After the Chelsea death march on Friday what I really needed and was hoping for was a crazy night at some bar in Williamsburg. Luckily, Justin was spinning at a bar down the street from where I was staying. He used to have 80+ Prince singles but, I don't remember hearing him play any during his set. Actually, I didn't remember much after the 4 1/2 margavesas and a whiskey shot. But, I checked my Facebook status in the morning and apparently I had a lousy milkshake at Kellogg's diner for a nightcap.

After a hazy morning my mates and I went down to the Whitney. There was a Charles Burchfield painting show there. I totally loved this stuff. It reminded me a lot of William Blake's work for some reason. My favorite works were the watercolors in which he seemed to render energy emanating from trees and other flora. He portrayed nature's invisible biorhythms in a sort of spiritual way with glowing yellow and white light. Very psychedelic and visionary. I'd have more pics but... No Bigture No Bigture! I had to pull these from the interwebs.

Later, it was a distressing afternoon for the members of Violent Bullshit. We missed the set but not the aftermath. Apparently, a string had broken, and their 11 minute set was lacking in focus and energy. I tried to console the bassist but I just made it worse. The guitarist was surprisingly upbeat though, ready to get on with his new life without his girlfriend who just dumped him and without his band who he was dumping. Only a crazyman named Sam Tobin could resuscitate this gloomy ex-pool supply store.

On Sunday Scotty RV and I took a ferry to historic Governor's Island. It was free except for the 2 bills we lost playing blackjack in the casino on the lower deck. On this barren outpost the lonely soldiers stationed here would put on elaborate shows to liven their dreary and desperate lives. Some times it was dinner theater featuring saucy vignettes while other times it was a musical with costumes. They would often fight each other to play the female rolls. One of the goals of my trip was to visit a bar in Manhattan called Max Fish where we used to hang out during the band years. Never got there but, I did get to see the t-shirt at the Meatopia festival on Governor's.

After meeting Justin & Stacy later in the afternoon for the end of the World Cup match at a bar in Greenpoint I went to a local recording studio to see what Turing Machine was putting together. Gerry Fuchs, their drummer had passed away late last year and Scott and Justin were trying to cobble something together from various demo recordings to put out a third album. Andrew, their producer played me a couple of things, one of which was a fantastic improvised jam recorded at Scott's upstate NY home. Very exciting driving Turing Machine style stuff. Can't wait to hear what they come up with. But, it will take some time.

While in the studio I took a couple hours out to meet an NYC performance artist, Shaun El C. Leoardo at a bar called the Pencil Factory down the street. I had seen one of Shaun's performances that he did at LACMA in LA awhile back called Bull in the Ring. My cinematographer friend Brad Cooper was filming it for him. It featured Shaun leading football drills and then being pummeled by 10 burly linebackers. It was pretty intense. Shaun's performance work involves personifying masculine role models in order to "truly experience the psychology and pain involved with representing the hero figure". In another performance called Battle Royal he got in a cage match with several blindfolded professional wrestlers for 3 hours! I had a great conversation with him and his artist friend. Hopefully I'll catch one of his upcoming projects when I visit NYC again. Go to his website to read about his interesting work.

Bull in the Ring
http://www.youtube.com/watch?v=FioYRo77sd8&feature=related

Battle Royal
http://www.youtube.com/watch?v=_pdFkcMW9fE
Posted by Treiops Treyfid at 5:39 PM No comments: Links to this post

Being "based" in LA (whatever the hell that means) I write about LA arts here at TTINLA blog. But, last weekend I had a bit of an NYC art trip so I thought I'd write about it. I was mainly out east to see my mates who I was in a band with in the 90s (pitchblende). But, I had enough time to go arting too.

I had never visited the Chelsea gallery area in Manhattan's lower west side so I took an afternoon to peruse it. Vast! I had no idea. In about an 8 square block area it seemed like almost every building was a gallery, or a building full of galleries. It took me 4 hours and I was passing up probably two thirds of the spaces. My head was spinning and my feet were aching. 100 degree temperatures accompanied me.

I can't begin to start writing a review of this, it's just too much. So, I just picked some things out that seemed interesting to me. At the Carolina Nitsch Project Room was a fantastic show of strange artworks. Richard Dupont had some bizarre and compelling figurative sculptures. Honestly, this shit just kind of freaks me out. Little naked and bald men on a table all contorted in slightly different ways. I would assume in a 3D program and then somehow cast in polyurethane resin. Want to try some DMT? No need, just check this stuff out.

My favorite show in Chelsea ironically, featured an LA "based" (there it is again) artist, Tim Hawkinson. I've always loved his inventive and complicated work. He's a true mad scientist. The Pace Gallery was displaying Tim's "One Man Band" series. These are works that are musical in nature and have scores sort of like old player pianos. But, the scores are on plastic film, a row of beads, or screws in an old thermos. When the pieces are activated by a motion detector they spring to life and start making "music". It's mostly dissonant patters as far as I could tell. Fantastic!

At Slag gallery were some bold and slaggish busts by Kristian Kozul. They were sort of emulating classical busts of Roman generals and politicians but they had a modern twist looking like they were dripping in crude oil and featuring contemporary clothing. One called Guardian of Prosperity appeared to be a cop in riot gear including a gas mask. I thought these were brilliant.

Ok, I think I got a couple more episodes for this trip so stay tuned for parts 2 & 3.

I had a nice walk through Beverly Hills last Saturday. No, I didn't stop at Dior for a $5000 black satin leather jacket. A super lady (Micol Hebron) was talking a super walk in her silver superstar outfit all the way to the ocean from downtown via Wilshire. Friends were driving and biking by to give their farewells on her journey. One cohort was walking the entire 16 miles with beachball in hand. This was Micol's final "act" in Los Angeles as she is off to...Paris? No, Utah to pursue other artistic endeavors such as being the Senior Curator at the Salt Lake Art Center. I hope she doesn't forget about us here in LaLa Land. Once she realizes she has to join a private club to drink a Coca Cola maybe she'll spend her weekends here. 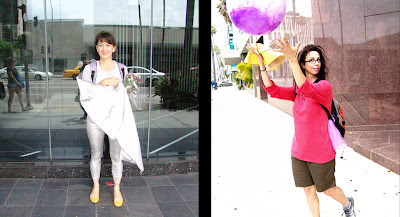 Later that day I went to a great photography show at Cella Gallery in North Hollywood. Disambiguations featured the work of Sinan Revell. There were actually 3 separate bodies of work being shown all from the last few years. In the doppelgANGER series Sinan plays chameleon by posing as every character in her photo montages. Sinan appears as glamourous LA trophy wife and gardener, busy business woman and homeless person, police brutality victim and policeman, as well as many other pairings that represent social and class opposites.

All the work was of the highest quality in execution. The various characters are seamlessly composed in the environments. All the characters looked surprisingly natural and legitimate especially considering that they are all the same person. Very fine work indeed!

Also present were Homeland Security Blankets featuring some of the crime-orented photographic images made into tapestries, and Sinan's Color Blind series. A really amazing display of work which I've seen parts of in past shows but having it all together was really very impactful. Brad Cooper was at the opening as well, Sinan's collaborator.

So, take a trip up to North Hollywood's Cella Gallery and view this fantastic show up through July 26th. It's actually the only art gallery in North Hollywood's "Art District" according to the young and attractive interns.

Sinan Revell
http://www.sinanrevell.com
Posted by Treiops Treyfid at 10:50 PM No comments: Links to this post